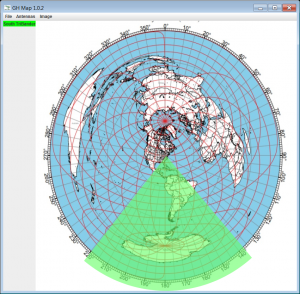 Several weeks ago it was notice that the rotor on our south tower TriBander had frozen up again. After being refurbish several times already it was decided to just replace the rotor with a new one.  It was a good decision due to the fact of when Matt climb the tower to remove it the rotor felled apart in his hands.  Due to the research of done for the Mosley antenna it was decided to get a Green Heron rotor package.  This controller has several smart features including starting the rotation slowly and ramping up the speed as it turns. Plus a nice safety feature of the controller not seeing any movement it will cut the power and show an error message.  It has one more fancy feature in it ive better feedback to the computer.  The little N1MM program will now show you what direction it is pointing and you can watch it move with a small pointer inside the program. Green Heron program is even fancier in it show a map with an overlay of the signal pattern on the map and you can click and drag the overlay to what ever country you want to work.  So come on up for the social meeting and try it out. Special Thanks goes out to Matt, KB3PJW and Karl, WA3VXJ for doing all the tower work in the summer heat.