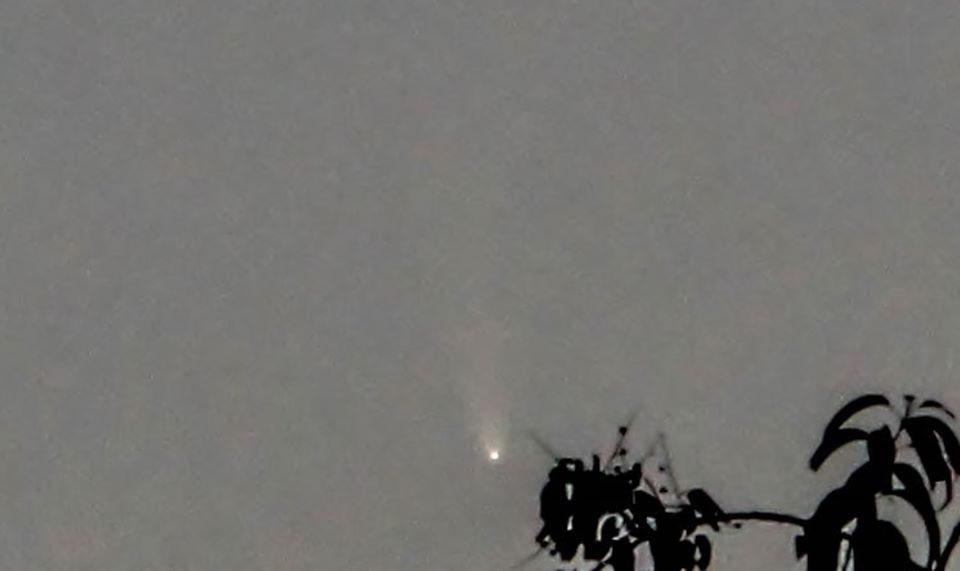 Here is a picture that our John Jennings KC3MMC took last week when the comet was only visible in the early morning hours. 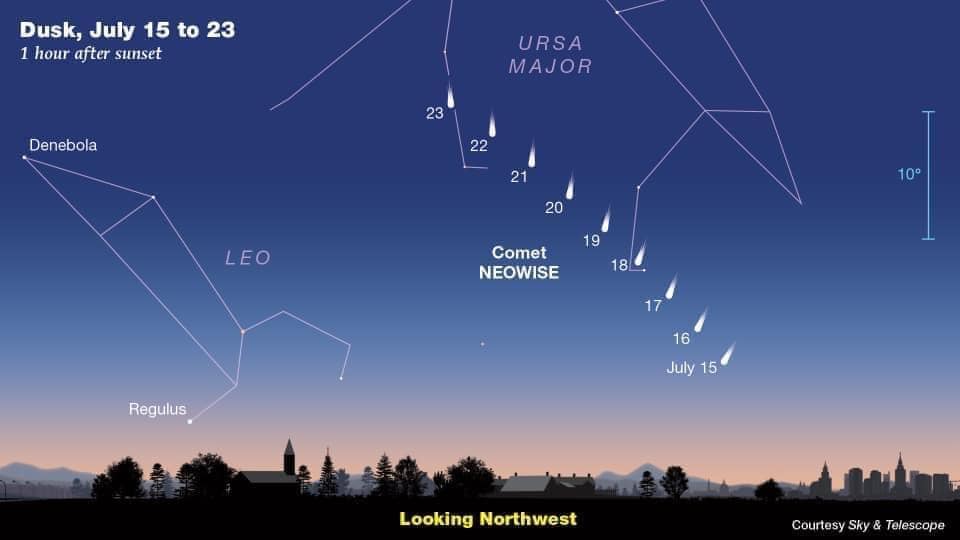 Here is the locations where you can find the comet over the next several days.  Basically look for the big dipper then look down to the horizon.

For observers in the northern hemisphere, in the morning, the comet appears low above the north-eastern horizon, below Capella. In the evening, the comet can be seen low in the north-western sky. The comet can be seen in the morning and evening because it is circumpolar from about latitude 45N. The evening view is better. On July 17, Comet NEOWISE will enter the constellation of Ursa Major, below the asterism of the Big Dipper (The Plough). (If Ursa Major was upright, it would be on the right of the Big Dipper, as of July 15th.) 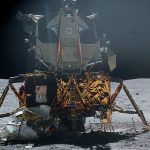 Germany’s amateur satellite organization AMSAT-DL has submitted a comprehensive proposal to the European Space Agency (ESA) for its Lunar Amateur Radio Transponder (LunART) lunar lander — a communications platform on the Large European Lander to support communication and payload experiments. AMSAT-DL’s Peter Gülzow, DB2OS, and Matthias Bopp, DD1US, say that a LunART (called “LunaART” in the AMSAT-DL proposal) would support direct communication with Earth via amateur radio, support university and student payloads and offer direct access to their experiments, and expand the reach of radio science. It could also provide backup communication capability and capacity during an emergency, or when the ESA network is busy. 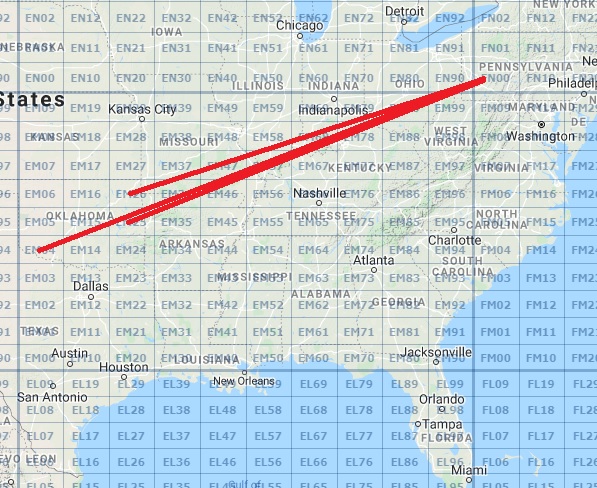 Can you work DX on two meters?  Yes you can and Bobbie N3LL just proved it again.  From our club house above the county with the huge beams we have on not only 2 meter but 70 cm also you can really get out.  Here is Bobby, N3LL  comment on contact he made today July 5th.

“I was on today and we had a 2 meter E skip opening finally worked into EM25,EM26 and EM04…….OK and TX. Here is just what one of the guys said on the VHF blog page ..many other comments on hearing the W3KWH station on the air again.”  N3LL 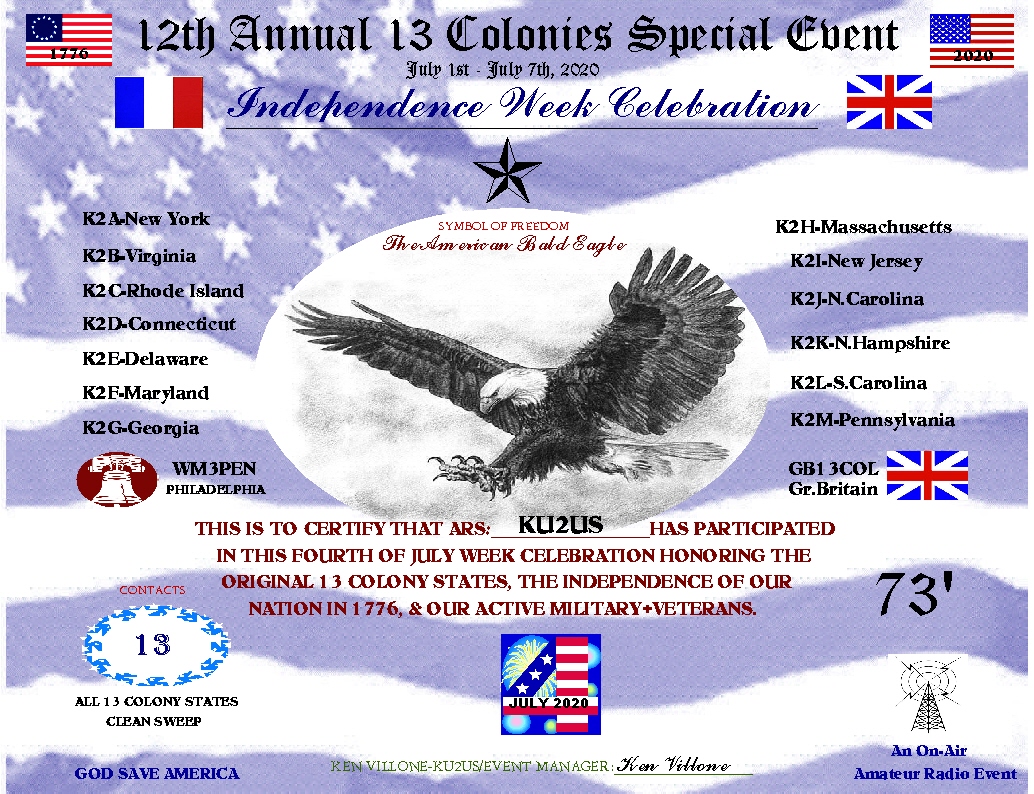 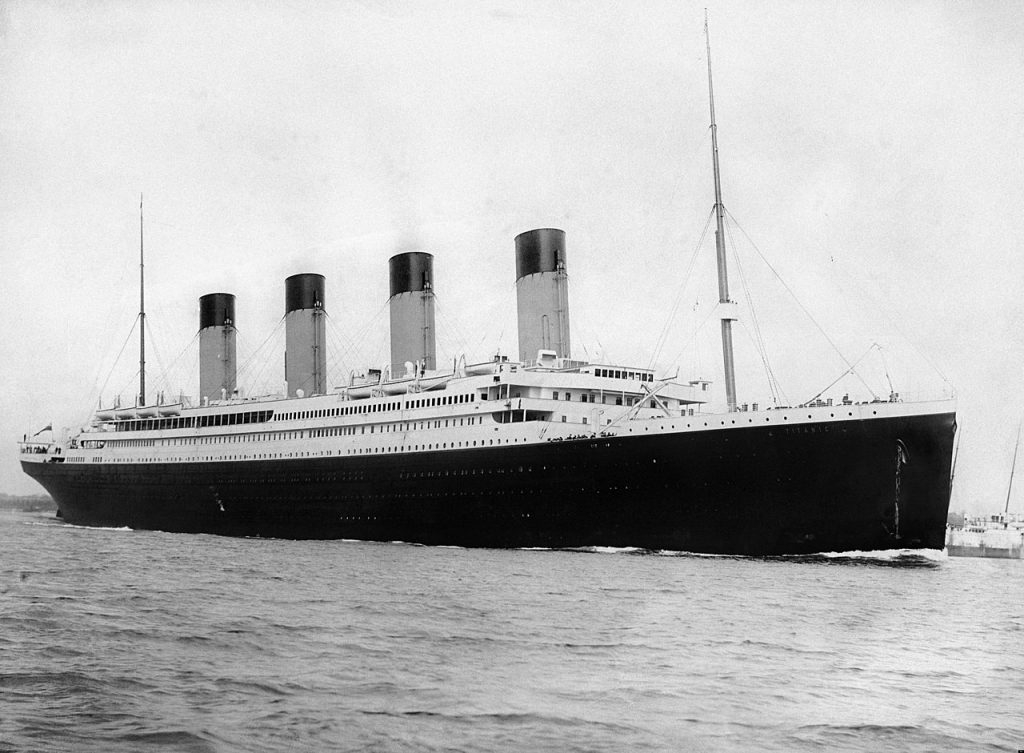 For some reason, of all the ships that have sailed the oceans, it’s the unlucky ones that capture our imagination. Few ships have been as unlucky as the RMS Titanic, sinking as she did on the night of April 15, 1912 after raking across an iceberg on her maiden voyage, and no ship has grabbed as much popular attention as she has.

During her brief life, Titanic was not only the most elegant ship afloat but also the most technologically advanced. She boasted the latest in propulsion and navigation technology and an innovation that had only recently available: a Marconi wireless room, used both for ship-to-shore and ship-to-ship communications.

The radio room of the Titanic landed on the ocean floor with the bow section of the great vessel. The 2.5-mile slow-motion free fall destroyed the structure of the room, but the gear survived relatively intact. And now, more than a century later, there’s an effort afoot to salvage that gear, with an eye toward perhaps restoring it to working condition. It’s a controversial plan, of course, but it is technologically intriguing, and it’s worth taking a look at what’s down there and why we should even bother after all these years.

One of our neighboring clubs the Uniontown ARC has cancelled their annual Grabfest event for Aug, 2020.  The Uniontown club is one of the area clubs that have a club house which mean they have a lot more expenses than most clubs.  Without the funds from Grabfest that is going to hurt their pocketbook.  The club had already put out funds to purchase the hamfest prizes which you can see below so what they are doing for a fund raising is having a raffle to win some of these prizes.  Read the news release below and contact George to buys some tickets.

To help reduce or eliminate this deficit, the membership has decided to solicit our members for donations of any amount to help defer the loss of income from cancelling the hamfest.
We have several hamfest prizes that were already purchased: Quantity 1 – Yaesu FTM-3200DR 65W VHF Fusion Mobile, Quantity 2 – Yaesu FTM-3207DR 55W UHF Fusion Mobiles, and a few other assorted items. We would like to offer an incentive to our members to donate by conducting a drawing for each of the remaining prizes to be held at the conclusion of the August 5, 2020 UARC General Business Meeting. For each dollar donated, you will receive one chance in the drawing for the available prizes. A $100 donation would receive 100 chances. A $20 donation would receive 20 chances.

Our Gabfest has long enjoyed the financial support of our members – through the purchase of prize tickets and donations toward budgetary expenses. If you would like to assist UARC in offsetting our loss for 2020 and our Gabfest cancellation, please send your donation to UARC, c/o George Syner, Treasurer, 433 Old Pittsburgh Rd, Uniontown, PA 15401.