The World Administrative Radio Conference (WARC) bands are three portions of the shortwave radio spectrum used by licensed and/or certified amateur radio operators. They consist of 30 meters (10.100–10.150 MHz), 17 meters (18.068–18.168 MHz) and 12 meters (24.890–24.990 MHz). They were named after the World Administrative Radio Conference, which in 1979 created a worldwide allocation of these bands for amateur use. The bands were opened for use in the early 1980s. Due to their relatively small bandwidth of 100 kHz or less, there is a gentlemen’s agreement that the WARC bands may not be used for general contesting. This agreement has been codified in official recommendations, such as the IARU Region 1 HF Manager’s Handbook, which states: “Contest activity shall not take place on the 10, 18, and 24 MHz bands.”

The Atlantic Hurricane Season, which starts on June 1, promises to be a busy time for amateur radio volunteers on the Hurricane Watch Net (HWN) to report ground-level storm conditions in real time for use by National Hurricane Center (NHC) forecasters, and for SKYWARN volunteers, many of whom are hams. The National Oceanographic and Atmospheric Administration (NOAA) has forecast a likely range of 13 to 20 named storms (winds of 39 MPH or greater), of which six to ten could become hurricanes (winds of 74 MPH or greater), including three to five major hurricanes (Category 3, 4, or 5, with winds of 111 MPH or greater) expected. NOAA projects these ranges with a 70% confidence level.

“2021 is looking to be another active season,” said HWN Manager Bobby Graves, KB5HAV. “We can only hope we don’t have a repeat of 2005 or 2020. The sea surface temperatures throughout the normal areas of tropical cyclone activity are already near or just above 80 °F, just what storms like. The current forecast for 2021 is on the high side. The adjusted average is 14 named storms, with seven hurricanes and three of those at Category 3 or stronger.”

When activated, the HWN operates on 14.325 MHz during daylight hours and on 7.268 MHz after dark. When required, however, the net will use both frequencies simultaneously.

The net’s primary mission is to disseminate tropical cyclone advisory information to island communities in the Caribbean, Central America, along the US Atlantic seaboard, and throughout Gulf of Mexico coastal areas. It collects observed or measured weather data from participating radio amateurs in storm-affected areas as well as any post-storm damage reports and passes that information along to forecasters at the National Hurricane Center via its amateur radio station, WX4NHC. The HWN typically activates whenever a storm system has achieved hurricane status and is within 300 statute miles of a populated landmass — although this can vary according to the storm’s forward speed and intensity or at the request of NHC forecasters. The 2021 Dayton Hamvention has been cancelled, but Contest University 2021 is still on, online that is. Not only that, it’s free! It will take place at the same time and on the same date as the live event would have.

*Four ICOM Radios will be given away during CTU at random times. You must be registered in Zoom and present during the random time drawing

I have taken one of my hotspots up the the clubhouse to act as DMR access point.  Since the club is mostly a Yaesu System Fusion club I have set it up to take your YSF signal and transmit it via the internet into an DMR talk group. This will let you check into DMR nets via the hotspot. Now since the hotspot has only milliwatts output you must be at the clubhouse to use the hotspot.  Just take your Yaesu handheld or use our FTM-400 radio and tune it to 145.650 Mhz YSF simplex.  Then talk and your signal will go out to the PA DMR net talk group 3142.  There is a net on that talk group 3142 on Tuesday night {Unfortunately the same time as SCARC net} if you want to listen or check in.

What this will be useful for is if anyone needs to get on the PA DMR network to talk or for the next ARES alert/SET Drill that is using DMR transmissions.

If you want access to the hotspot to change to other talk groups please see N3LRG to find out how to use the hotspot.  Below is a picture of a MMDVM Hotspot you can find them on Ebay for $26 on up depending if you want to solder or not. You will need to pick up an Raspberry PI Zero-W to run these boards. These will take any digital signal YSF, DMR, D-Star and put it out on the internet to link up with other reflectors around the world. 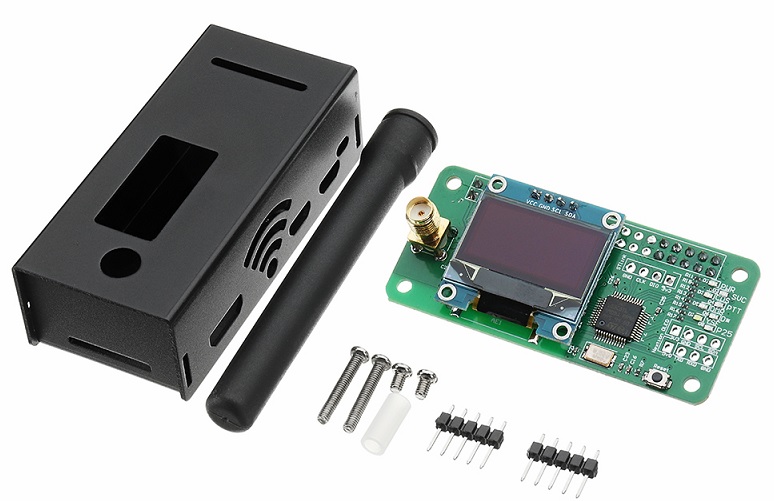 Also note the club SDR receiver will pick up the hotspot too. Goto 145.650 Mhz on the Middle 2m Band there is a bookmark called W3KWH-HOT

As part of our series of EPA ARRL Section online seminars, we invite you to register for “Winlink Basics” presented by Mark Wheeler, KZ3MW, on Saturday, May 15, 2021 at 10:00 am (via Zoom).  During Field Day in June I’m going to encourage everyone to send me your Section Manager Messages and your 10 messages for bonus points via Winlink.  If you are not familiar with this handy tool, now’s your chance to take a look at it.

Try out our two new items at Steel City ARC. Added to our equipment list is an Online  SDR-Receiver and a APRS digipeater & I-Gateway. Both of these have been added to the club with minimal cost to the club.  Special thanks goes to Patrick, W2BRS for donating the new file server which is also handling the OpenwebRX receiver. Also Matt,  KB3PJW for donating the Raspberry PI & Radio that is handling the the APRS traffic.

The OpenwebRX SDR receiver will let you listen to ham and SWL station right from your computer browser.  OpenwebRX is special in that if you click on the frequence bookmark like “FT8” it will even decode what is being heard on FT8. 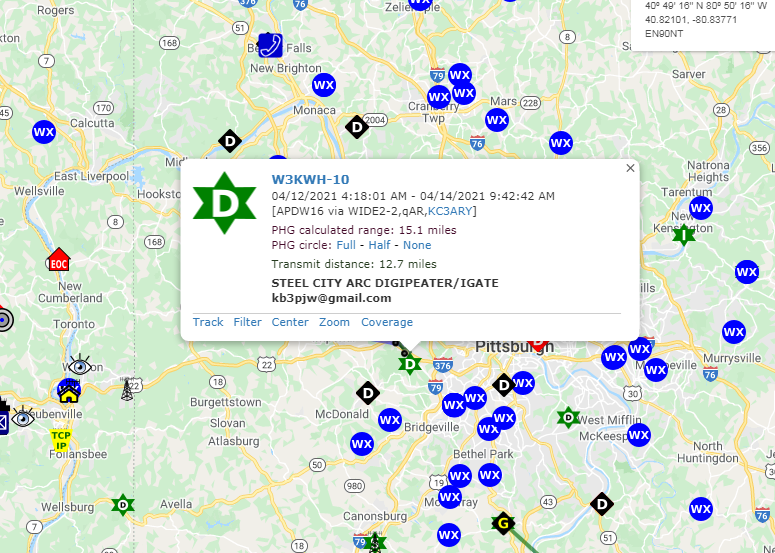 The APRS Digipeater/I-Gateway is a digital repeater that repeater APRS packets.  The area West of Pittsburgh has been an weak coverage area for APRS packets especially for I-Gateways that take your packets and post the on the internet like on aprs.fi and aprsdirect.com

The SET Drill is April 3rd from 9:30 am to 12:30 pm. For this drill, we will be working with the Army Corps of Engineers and the Pittsburgh NWS. We will also have a practice Skywarn net as well with real time observations (like we do for Skywarn Appreciation Day). The attached documents have more information regarding the drill.

I will need volunteers to observe and report conditions per the attached at:

If you have any questions, please feel free to reach out to me.
73 de NU3Q Bob
Allegheny County EC 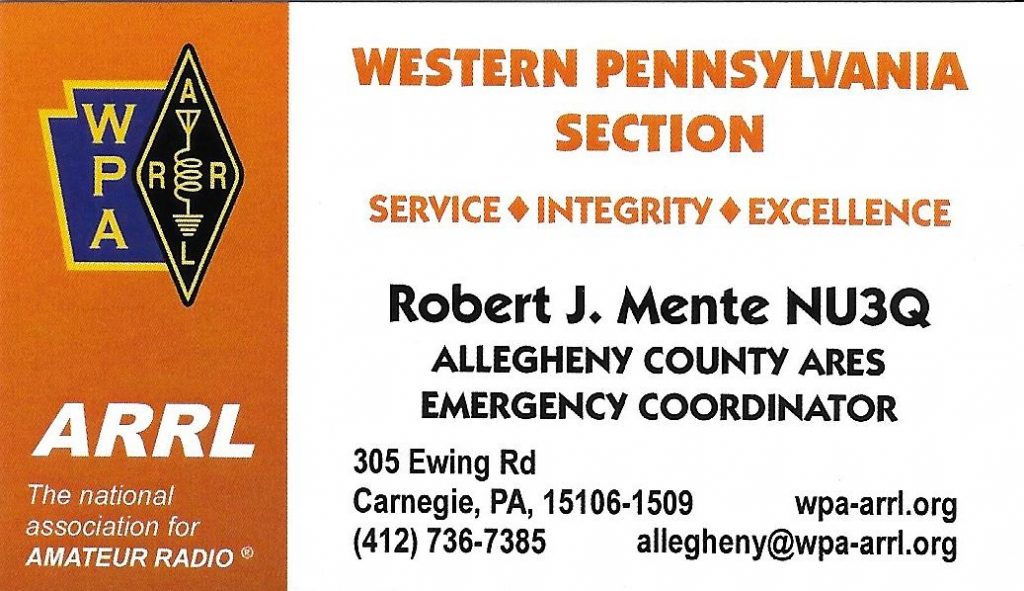 NOTE ! ! ! – Start planning early the VE Testing sessions are getting busy now more people are taking the testing before the $35 fee is imposed

Click on the map for Google directions.  Walk in are OK but please register with Chris, K3PQ to make sure there will be room for you.  There is parking right across the street fro the build at the library. 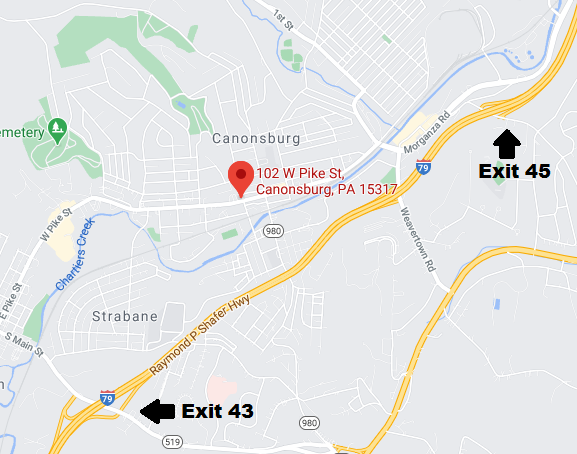