Invite emails have been sent out check your email.

There will be an online business meeting via Zoom on Tuesday night at 7:30 PM EDT.  All members should try to attend this meeting as we will be going over several major agenda items for the up coming months.   Invites will go out Monday check your emails for the link to the zoom meetings.  Pending Members you should receive the same invite if you haven’t gotten it by Tuesday morning please email Christine at N3LRG {at} W3KWH {dit} COM.  If you want to join our meeting as a guest please send an email at the above address.

Special thanks goes to new members Mich and Bill and their amazing truck at helping us take down the broke Hex Beam on the far tower. It was first quite a task getting it off the tower and a even bigger task of just lowering it down since it was tangle with the tower.   All parts have been separated out and examine we do have 2 broken fiberglass segments.

Also using another one of Mick’s truck to work on the 440 repeater tower.  We had to restrung the wire rope the proper way and mange to get the antenna about 10 ft higher. I seem to be getting out even better now.

Ham Radio Network is a UK club and are hosting an evening with Andy Carpenter from SDRPlay.  Andy has a close affiliation with Ham Radio Network and his previous talks always attract large audience numbers which engage with him as he explains the range of SDRPlay devices, SDRUno software developments and plugins to enhance the user experience.  The evening will end with a direct Q & A with Andy so users can ask specific questions they may have.

The March 16th business meeting will be held via Zoom. The survey results have been posted below. It will be helded at 7:30 PM and look for the Zoom invite on morning of the 16th. Note: We are still looking at having business meeting at the club house in April it might need to be helded on a weekend afternoon since it will be outside.

New members should make sure their applications are into Art, WA3BKD so that you have your readings.  wa3bks [at} gmail [dit] com

Guest that wanted to be invited into the club that havent done so yet should make sure Christine, N3LRG have your email address to get the invite. n3lrg {at} w3kwh {dit} com 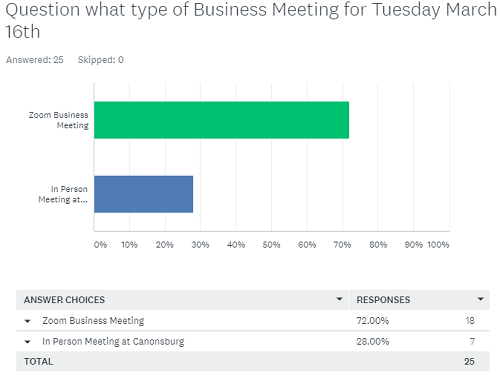 Come join HamSCI at its fourth annual workshop! Due to restrictions caused by COVID-19, this year’s workshop will he held as a free virtual workshop.  The meeting will take place March 19-20, 2021 using Zoom hosted by The University of Scranton in Scranton, PA  and sponsored by the National Science Foundation. The primary objective of the HamSCI workshop is to bring together the amateur radio community and professional scientists. The theme of the 2021 HamSCI Workshop is midlatitude ionospheric science. Invited speakers include Dr. J. Michael Ruohoniemi, Virginia Tech Professor and Principal Investigator of the Virginia Tech SuperDARN Initiative, and Joe Dzekevich K1YOW, an amateur radio citizen scientist who recently published his work in CQ Magazine. Dr. Elizabeth Bruton of the Science Museum of London will be the Keynote Speaker.

This workshop will also serve as a team meeting for the HamSCI Personal Space Weather Station project, an NSF-funded project to develop a citizen science instrument for studying space weather from your backyard. The PSWS is led by the University of Scranton, and includes participation from TAPR, Case Western Reserve University/W8EDU, the University of Alabama, the New Jersey Institute of Technology CSTR, MIT Haystack Observatory, Dartmouth College, and the amateur radio community at large.

For more information on the event: https://hamsci.org/hamsci2021

With the former Voice of America Delano relay site in Central California scheduled for eventual demolition for resale, the Collins Collectors Association (CCA), in association with the Antique Wireless Association (AWA), came up with a plan in 2014 (working, among others, with past ARRL Midwestern Division Director Rod Blocksome, K0DAS, a former Collins engineer), to retrieve one of the Collins 821A-1 250 kW HF transmitters from the site and put it on display at the AWA museum in Bloomfield, New York.

The Delano site, known as DL-8, went on the air in 1944 with a 170-foot rhombic antenna. The Collins 821 A-1 transmitter was autotuned and could shift frequencies between 3.95 and 26.5 MHz in 20 seconds. The transmitter and its associated components represent serious heavy metal. The Delano site, now owned by the General Services Administration (GSA), remains with antennas still standing and buildings in place and demolition on hold, because it was discovered to be the habitat for an endangered species of shrew.

A video presentation featuring Dennis Kidder, W6DQ, describes and illustrates the entire removal and relocation effort and offers some background on the VOA. On the continental US, the only remaining VOA site is the Edward R. Murrow Greenville Transmitting Site in North Carolina. 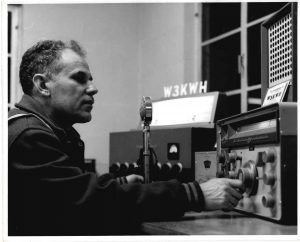 DIGITAL – Saturday March 13th will be the Breezeshooters ten meter groundwave contest. A great way to spend a evening talking to amateurs in the local area. Click the link below for details and rules.

Here is a chance to learn to have some fun outside while operating your ham radio. While also letting your fellow ham operators chase you as you explore our natural resources of our park system.  Curtis Turner, KB3CMT gave this great presentation during our Wednesday night social meeting.